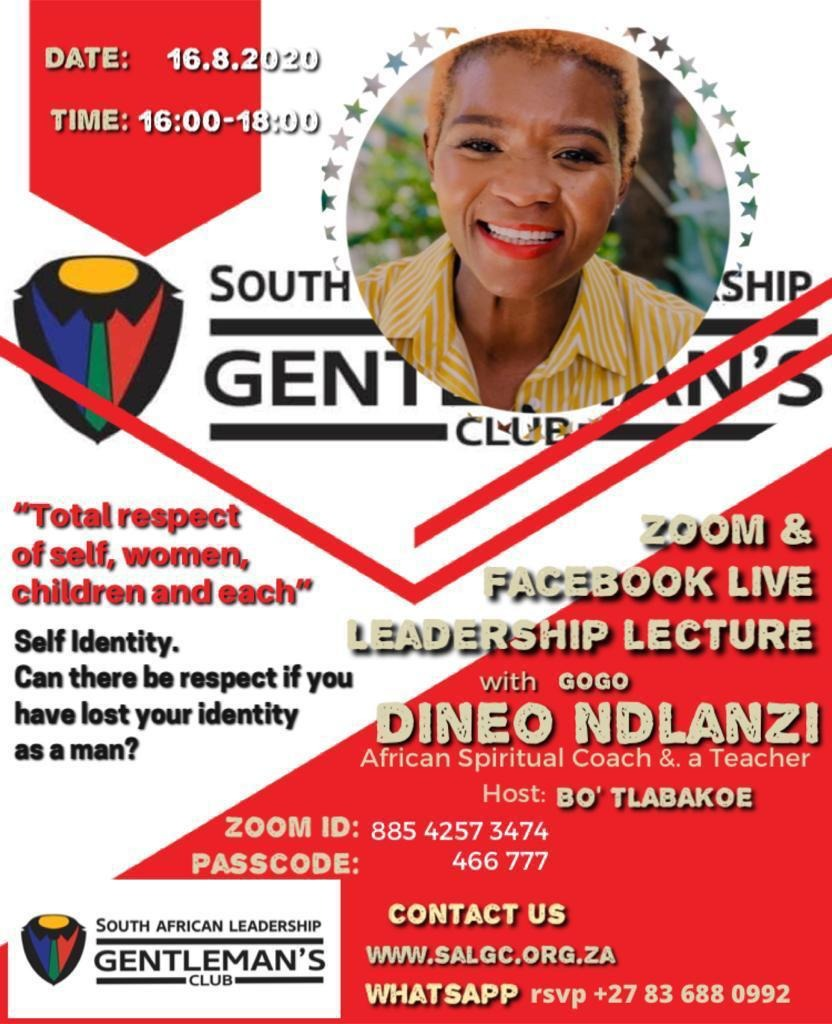 SALGC INVITES YOU ALL TO THIS ONLINE EVENT
Zoom and Facebook Live Self Identity Leadership Discussion
with Gogo Dineo - African Spiritual Coach and a Teacher
&
Hosted by Bo' Tlabakoe
Date: 16 August 2020
Time: 16:00 - 1800
Place: Zoom and Facebook
Zoom ID: 885 4257 3474
Passcode: 466 777
RSVP:WhatsApp: 083 688 0992
“People who are connected to their ancestors are like trees with strong roots that possess a great ability to thrive.” Gogo Dineo

Gogo Dineo Ndlanzi is a pre-eminent and pioneering sangoma, who has successfully merged the sacredness and spirituality of ubungoma with modern thinking. She is a celebrated spiritual teacher, life coach, Afrikan storyteller, writer, dancer, trained facilitator, and soon-to-be health wellness instructor.

Teaching is at the heart of what Gogo Dineo does. Gogo Dineo has cemented her position as a foremost speaker as she has graced the TEDxCAPETOWN stage in 2019 where she eloquently discussed the 5 key lessons that she has learned as a spiritual healer.

Is an international teacher who set the stage alight as a keynote speaker in Luneburg, Germany at Leuphana University in 2019 at their conference on Leverage Points and Sustainability. She focused on how systems can leverage indigenous and local knowledge to overcoming systemic failures. This talk cemented her position as an international teacher as she was able to translate nuanced local knowledge and give it global relevance.

She recently participated `ON THE CALL TO UNITE` global campaign, which was aimed at giving positive offerings in the current pandemic (COVID-19) With leaders such as Oprah Winfrey, Quincy Jones, Ndaba Mandela, Martin Luther King III, just to name a few.

Gogo Dineo was the keynote speaker at the UNISA 2018 Decoloniality Conference. She has lectured at leading universities in South Africa, which include Monash (Social Studies Department), Stellenbosch, and Wits (Health and Science Department). She is also an international teacher who has worked in Ethiopia, Ghana, Zambia, Lesotho, and Brazil.

Gogo Dineo is an advocate for Afrikan based education and sits on the interim committee at Wits Medical School to transform the medical curriculum holistically include indigenous African healing methods. She is also an in-house consultant for the Study Trust. Her cultural advocacy has seen her act as a Cultural Advocate for the Castle Milk Stout 2019 campaign. Her work extends to corporate work and she is a board member of the Southern African Food Labs, an organisation that promotes creative responses to the problem of hunger.

Gogo Dineo is versatile and has had a cameo role in Rhythm City where she also acted as a cultural consultant to ensure that the content was a true representation of ubungoma traditions. Gogo Dineo also collaborates with government institutes such as the Department of Traditional Affairs to bring about a holistic understanding of Afrikan spirituality and healing.

She has been featured in magazines such as Glamour Magazine, True Love this shows the span of her influence and relevance to modern society. She was the resident sangoma on the Fresh Breakfast Show with a dedicated monthly slot every last Tuesday of the month on Metro FM. She founded the Heal Your Life Series on Power FM 98.7, a show dedicated to teaching listeners Afrikan Spirituality and philosophy. Gogo Dineo is also a regular on Radio 2000 where she interprets dreams for listeners. She has made regular appearances on 702 and Kaya FM and has appeared on television shows such as 3 Talk with Anele, Chatroom, and Daily Thetha.

She is also a cultural advisor on various television shows and artist performances. She currently has a feature with The Morning Show on ETV called ‘African Spirituality Corner with Gogo Dineo’ She is also a licensed Heal Your Life Teacher and certified Organisational Systems Coach. The best way to summarise her life’s work is that she is a facilitator of change. She is passionate about enlightening people to view life from a different perspective through bringing about changes in peoples’ outlook to allow for holistic healing.

Gogo Dineo brings creativity to facilitate safe learning spaces and processes of social change. She founded the Gogo Dineo Wellness Institute in 2016. The institute uses indigenous knowledge systems to facilitate optimal functioning of the mind, spirit and body. It is a knowledge hub that trains those who are called to be sangomas as well as facilitating and educating the public on Afrikan Spirituality through public talks, facilitation, coaching, and media. Her core philosophy is that people have to be connected to their Afrikan ancestry.

The institute is embedded in Afrikan ancestry and holds the belief that people who are connected to their ancestors are like trees with strong roots that possess a great ability to thrive. The institute continuously explores its function in the world in order to impart knowledge on Afrikan spirituality. For more information please visit: www.gogodineondlanzi.com