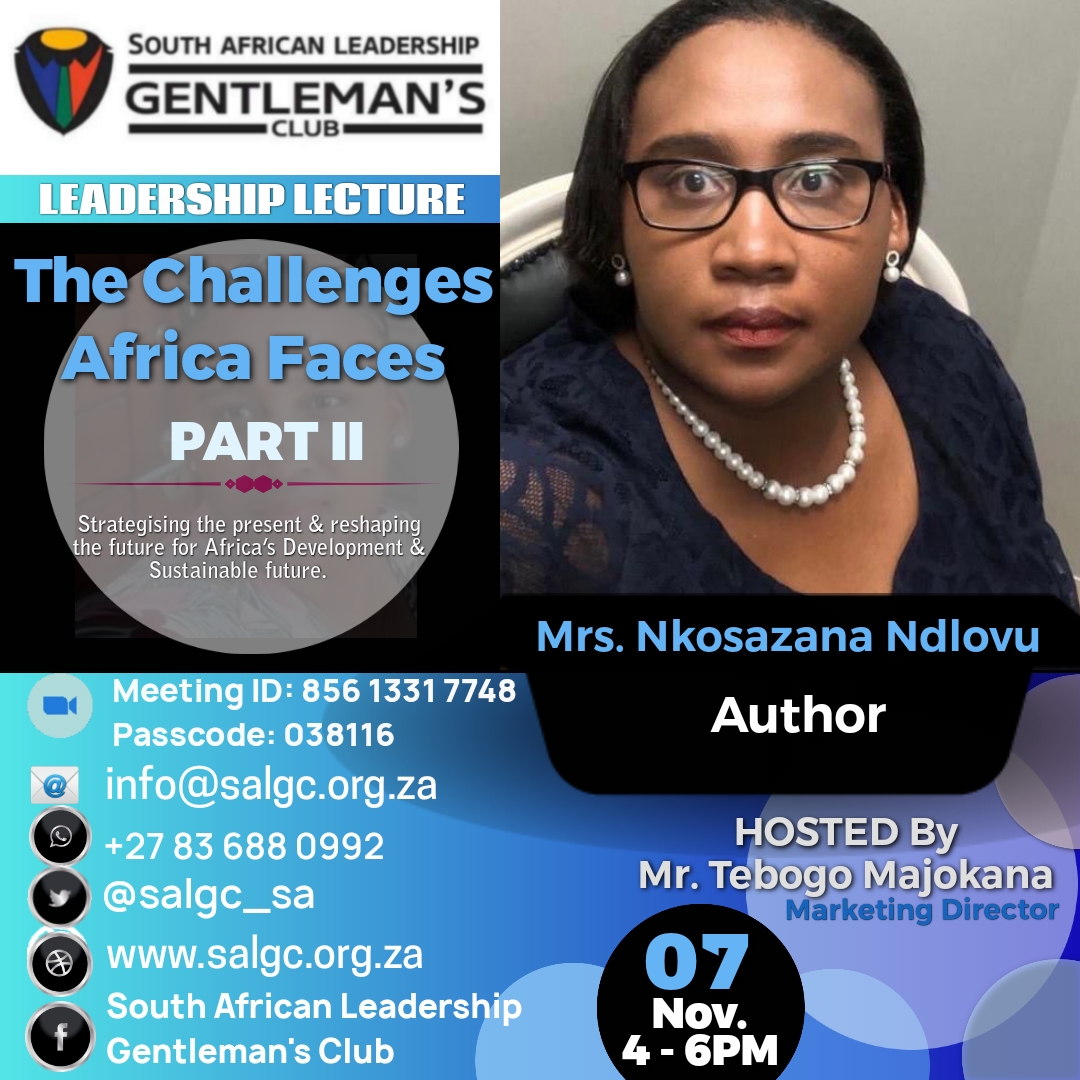 Nkosazana Ndlovu is an Auditor & Information Systems Practitioner. She is currently persuing a Legal career. She has over 18 years of experience in the public and private sector on several roles, including Risk Management, Governance, Internal Control & Systems as well as a Legal & Compliance work. She is a wife, mother, businesswoman and a social entrepreneur with a passion for education of the next generation of great Africans. She is a Pan Africanist and a Christian who believes in civil rights of citizens across the continent and globe. She is a strong believer in anti-corruption, the rule of law and building strong democratic institutions and ethical leadership to govern countries in order to manage economies in an efficient & effective manner to the benefit of citizens. She is currently serving in the top leadership of Africa 55 States under the guidance and mentorship of Dr Charles Sinkala and also Chairs SALGC Women’s wing – Friends of SALGC. She strongly believes that Africa will be the next world’s economic boom and wants to be part of the collective to drive that change. She has co-authored a book with her husband as well as ran a community ministry driving change and development in their community. Nkosazana is intelligent, dynamic, a self-starter and believes in positioning Africa to take her place in the world and believes in protecting Africa’s wealth to the benefit of the true beneficiaries, being indegenous Africans and those in the diaspora as the birth-right of Africans which is a cause she has dedicated her life in service for as a catalyst for change. She aspires to be a Legal Advocate for Human rights. She sits in the African Union’s Economic & Social cluster as part of a team of CSO’s in the continent driving change and lending their voices towards Africa’s development and economic prosperity in order to meet the sustainable development goals and in line with the African Union’s 2063 Vision. She is also part of the SADC Peace & Security Committee driven by African women in the region. Nkosazana is resilient, strong, a pioneer and unafraid of change and challenges that come with it. She believes Africa will one day feed the entire earth, if governed properly and she invests time towards the development of the youth both in education and entrepreneurship development through her NPC. She is a professional who works but also sits as a Non-Executive Director in companies that are in the scientific space where she plays her role towards good governance and also a strategic player in opening locked towards for black business in key industries that drive the economy where black people did not previously feature.