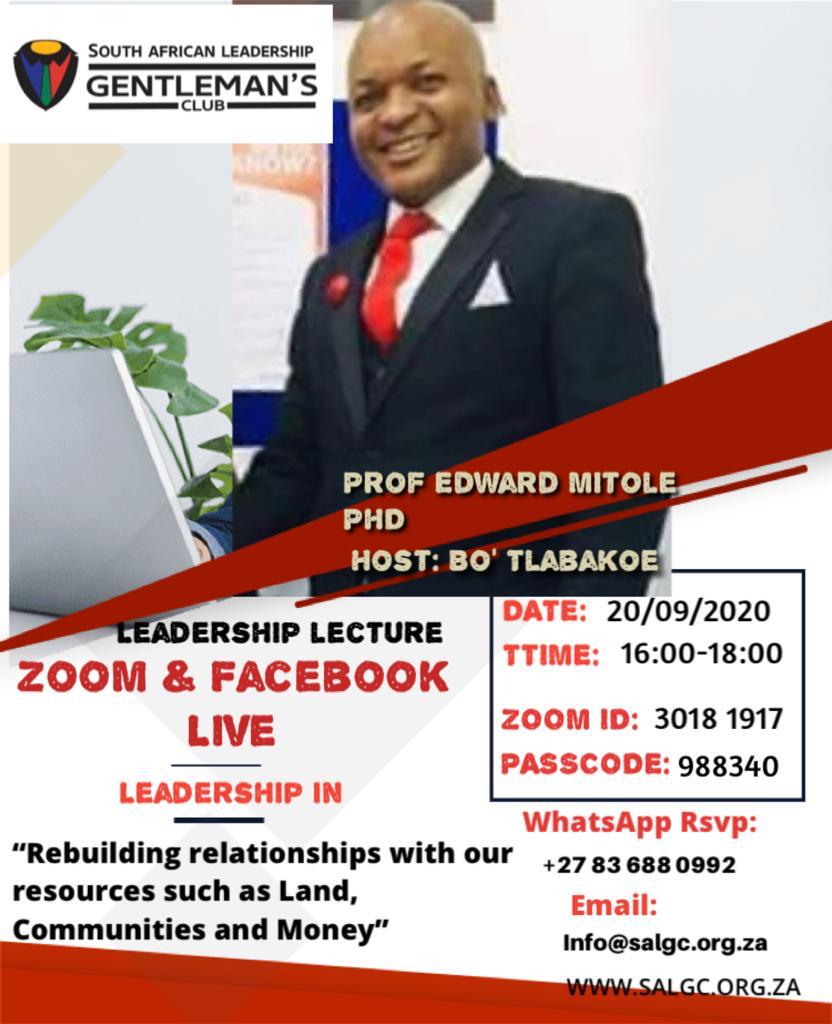 SALGC INVITES YOU ALL TO THIS ONLINE EVENT
Zoom and Facebook Live Leadership in Rebuilding relationships with our resources such as Land, Communities, and Money
with Prof. Edward Mitole - Founder and Chair at The African Renaissance Project
&
Hosted by Bo' Tlabakoe
Date: 20 September 2020
Time: 16:00 - 1800
Place: Zoom and Facebook
Zoom ID: 3018 1917
Passcode: 988 340
Email: info@salgc.org.za
RSVP:WhatsApp: 083 688 0992

He is a National Research Foundation (NRF) rated social scientist; a member of the Academy of Science of South Africa (ASSAf); a Fellow of African Studies Centre (ASC) in the Netherlands; and a Fellow of Program for African Leadership (PfAL) at the London School of Economics in the United Kingdom.

Mitole Edward, born on 25 May 1974 in Mangochi, Malawi, is a Pan African revolutionary and decolonialist, the most powerful proponent of the African Liberation Movement today, as well as the foremost black political thinker of our time. He is a speaker, social activist, theoretician and organizer of campaigns such as “The Curriculum Must Fall” and “Africa Unite”.

Following in the footsteps of previous black leaders such as Marcus Garvey, Kwame Nkrumah, Mangaliso Sobukwe, Patrice Lumumba and Malcolm X, Edward Mitole points to a positive future for the African Continent through the slogan made famous by the Garvey Movement of the 1920s, “Africa for Africans, at home and abroad.” He sends a bold message, calling on African people worldwide to unite their homeland, liberate their people and dispense with colonial borders that continue to divide and oppress.

His message to African leaders: “Unite and rally the Afrikan people behind the banner of Afrikan nationalism. Fight and defeat all forms of oppressive and exploitative rules, be it outright colonialism or neo-colonialism. Champion and promote the economic, cultural and spiritual interests of Afrikan people. Project the Afrikan personality in all aspects of life at all material times. Establish a democratic monolithic State of Afrika with one government, one military command, single economic market with one currency, and a common passport.